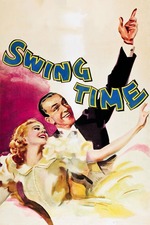 It takes thirty minutes to get into a dance number which is honestly a criminal offence in a Fred Astaire picture. And it's not terrible leading up to it, but the comedy prob would've killed in 1936 but I was quite uninterrupted in it. Although I was still entertained!

Honestly, what I cam here for, the dance numbers and songs were absolutely splendid, but what else can you expect from this duo? What the hell is with the blackface tho? C'mon Fred

A surprise to be sure, but a welcome one! I didn't think I would get this tangled up in the love plot but I was DIGGIN it. It's pretty constructed and what would now be formulaic in today's standards, it does derive from this touted formula with large giggles along the way. And Poor Singer guy, he honestly did nothing wrong, was heavily wronged himself and took it like a champ. The true hero of this film