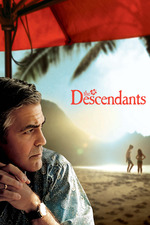 Had a hard day at work and I was like, you know what, I want to watch a comedy, how about that Alexander Payne movie I've never seen The Descendants, should be good for a laugh, right? lol, yeah not quite. This is basically a Disney Channel Original Movie on steroids. George Clooney is good in basically everything and on top of that looks like my dad, so I'm always happy to watch him in everything, but I was mixed on this one. It's not played like a black comedy; the human drama is realistically portrayed and the comedy element are underplayed, even the more over-the-top ones like Clooney marching to his friends' house (amazing) or the surfer-dude-boyfriend getting punched by Robert Forster (so dumb). The drama elements are decent, but this is no About Schmidt; the story is pretty familiar so I was half-tuning out to it all, but again, Clooney and Shailene Woodley give humanistic performances that are engaging so you can hang with material that's otherwise pretty soapy. I remember when this came out I was sort-of active on "the discourse" on film tumblr (in retrospect, also so dumb) and they hated this movie for some reason or another; I always remembered it was the Bechdel test but it passes that, so it must have been indigenous representation, or something...which the movie nods to, but a movie like Aloha was released only a few years later got hit with that stuff (haven't seen, but as an aside Cameron Crowe has had a fall from grace just like Alexander Payne and Jason Reitman, of great-to-mediocre dramedy directors) and I can't see a movie like The Descendants getting released in the current cultural climate and survive twitter. My favorite thing about this movie is the casting choice of Matthew Lillard, which is truly inspired, the perfect choice, such a punchable face.