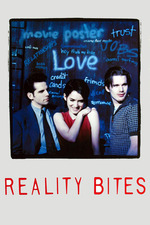 I'm one of those "cuspers," having been born in the early 80s, that you occasionally see referred to by stupid appellations like "Xennials," due to our having a fundamentally different childhood and adolescence than most of what is thought of as the Millennial generation, but being too young to have really experienced life as a "proper" Gen Xer. In some ways we got and are getting the worst of both worlds, and in some ways we came off a little easier, but I'm not here to unburden myself about anything other than my appreciation for this cult-classic summation of Gen X ennui (and, ultimately, friendship and romance). The cast is made up of a familiar group of mostly young and beautiful faces, most notably Winona Ryder and Ethan Hawke; Jeneane Garofalo and Steve Zahn co-star as the other two of a group of recent college grad friends, with director Ben Stiller, fresh off the (critical) success of MTV's "The Ben Stiller Show" playing a slightly older Gen Xer (or perhaps he's a "Xoomer!" A fellow "cusper!") who has been thoroughly absorbed into the commercial void that Ryder and Hawke, in particular, are trying to avoid. Nothing here exactly reinvents the wheel-- these sorts of films are made for every generation, multiple times a generation; Reality Bites wasn't even really the first of the bunch, coming well after Singles, which I remember being more popular-- but everything is done well enough and the cast is so uniformly charming and likable, and the issues these young people are grappling with remain so timeless while also carrying a definite period flavor that scratches that nostalgia itch for that early-/mid-90s era, that I can't help but think very fondly of it despite its sporadic lapses into well-worn genre cliche. Funny, wistful and touching, with a nice soundtrack.

The End of the Tour