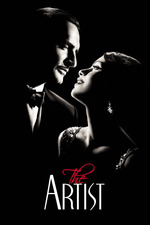 Saw this in film class a while back and was bored to tears by it (and we never finished watching it) so I decided to give it another go and was pleasantly surprised this time. I think it’s just that I suffer from ‘anything I watch in school is automatically shit’ syndrome because I can’t really pay attention to it as I found this to actually be a cute little movie. In it ripping off off narratives from classics like All About Eve and using, what is arguably, a silent film gimmick, it’s easy to turn your nose up at this movie and dismiss it as Oscar bait grovelling to the Academy (and it clearly worked because it won Best Picture). The film isn’t even really a silent film as it features talking and the story is very cliché but, despite all of this, there’s a really charming atmosphere that this film brings to the table that’s just too sweet to not be drawn into. The cinematography is very reminiscent of classic silent films (and even improves upon them in some camera movement and framing), the music is really upbeat and fits very well with the tone and the performances are so wonderfully theatrical (especially the leading man Jean Dujardin) that they really manage to drive home that whimsical and joyous style of greats like Chaplin and Keaton. By the end I was left with a smile on my face and, although I see it’s slightly flawed in some bits of it’s narrative, I do believe that this thoroughly makes use of the forms of all visual and audible queues at it’s disposal to tell the story and, coupled with a feel good atmosphere for the most part, it’s hard not to find this entertaining and charming. The dog was the biggest legend though let’s be real. 7.5/10

A Trip to the Moon